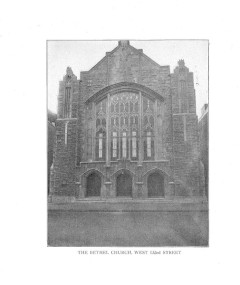 In 1819, Bishop Richard Allen sent the Reverend William Lambert of the Philadelphia Conference to New York City to organize an independent church that would be directly controlled by African Americans. Twenty individuals united with Reverend William Lambert to lease a schoolroom on Mott Street for 7 years, and thus, Bethel A.M.E. Church was organized. Bethel experienced some challenges in getting permanently situated. After moving several times to other rooms, the faithful members secured property on Second Street between Avenues B and C. The church was consecrated and it flourished for a time. In 1851, the Reverend J.B. Campbell was appointed to Bethel and it was at this time that African Americans began to migrate northward. Because modes of transportation were limited, African Americans could not easily or conveniently reach the church.

In 1862, Bethel once again met the people's need for a place to worship by relocating. The church sold the Second Avenue property for $8,000.00 and with a $4,000.00 down payment, purchased a church on Sullivan Street for $25,000.00. The number of attendees increased and the church prospered. After worshipping for 11 years on Sullivan Street, the pastor suggested that the church move uptown. After some debate, the membership voted to remain on Sullivan Street and enlarge the church, which they did at the cost of $35,000.00. In 1880, the vicinity began to lose its black population. Many other denominations moved and secured other locations. For more than ten years, Bethel struggled under difficult and fearful odds. During this time, the Reverend Derrick was called to pastor Bethel and under his powerful leadership the gloomy outlook was halted for a time. Strife rose again and the Conference sent two stalwart men, the Rev. Hurley and Rev. Stanberry, to convince Rev. Derrick to move the church.

There were times when they almost despaired, but the people of God prayed and labored on. In 1894 Bishop Tanner sent the Rev. J.M. Henderson with instructions to move the church within 8 months. The church sold its site and secured a brownstone structure on 25th Street. Bethel continued to worship on 25th Street and on May 18, 1912, ground was broken on lots 52 and 54-60 West 132nd Street to build a new house of worship. Bethel's first service at the 132nd Street location was held on September 13, 1913 at 6:30 a.m. At 10:30 a.m., the morning worship service opened with a thankful, proud, and happy processional of people. Bishop Tyree delivered the message. The church's praise and celebration continued for the week. Bethel has had a strong influence in the religious and cultural life of the Harlem community, but endured several significant internal conflicts along the way.

In the 1920s, dissention arose and a group of members withdrew from Bethel and they formed Mt. Calvary Methodist Church at 140th Street and Edgecomb Avenue. Bethel has been blessed with many pastors, each contributed much to Kingdom building; they are as follows: The Reverends; R.C. Ransom, A.R. Cooper, M. Thornton, W.W. Saunders, H.P. Clark, H.K. Anderson, J.A. Spearman, J.A. Portlock, H.B. Thompson, Charles Stewart, Richard A. Hildebrand, and Henderson R. Hughes. In the early 1940s, Bethel experienced another period of internal conflict. As a result, two new churches, Greater Bethel A.M.E. Church at 32 West 123rd Street, and St. Paul Community Church on 145th Street were founded as independent church coming out of Bethel.

Because Bethel was built on pray and faith, it is a strong part of her heritage to overcome obstacles. In 1947, Bishop R. R. Wright called Rev. Charles E. Stewart from his post at Wilberforce University in Ohio to pastor Bethel. Under his leadership the church was soon on its way to recovery. In 1950, Bishop Nichols assigned the then Rev. Richard Allen Hildebrand to pastor Bethel. He served for 15 years. Dr. Hildebrand instituted the 7:00 a.m. worship service. Additional property was secured and a building fund organized and incorporated under the New York state laws. Dr. Hildebrand had a vision of a new cathedral with apartment buildings. In 1965, Bishop John D. Bright appointed the Rev. Henderson R. Hughes as pastor. With the Lord's help, and the cooperation of the membership, Rev. Hughes succeeded in all of his endeavors. Shortly after the church building was renovated, the Chancel Choir, Gospel Choir, and Richard Allen Choir purchased a Steinway Grand Piano, new pews were installed in the sanctuary, the apartment building Bethel Manor 50 West 132nd Street was completed, and on June 10, 1972 Bishop Bright dedicated Bethel Manor and the house was opened for inspection and occupied in September 1972.

Following the successful tenure of Dr. H.R. Hughes, in May 1980 Bishop Hildebrand sent the Rev. O'Neil Mackey, Sr. to assume the leadership of the congregation. Under his direction, the church was carpeted and renovated. The highlight of the renovation effort was the installation of new chandeliers for the sanctuary. The church also purchased a van to transport seniors to and from church. Bethel now has an effective board of Education Ministries that focuses on young people as well as education matters for the edification of the entire congregation. In, 1995, Bethel began the Food Pantry, which feeds and clothes the poor in the Harlem community.

At the closing of the 179th Session of the New York Annual Conference, held on Sunday, April 29, 2001, The Reverend Henry Allen Belin III was appointed pastor of our beloved and historic First African Methodist Episcopal Church: Bethel. The congregation received him and his lovely wife, Sister Rita Sinkfield Belin, warmly. The First AME Church: Bethel family joyfully celebrates its many years of ministry, and we thank God for his many blessings.

We are here to welcome you! For non-emergencies, please visit us during our office hours: